Traveling entices my curiosity and I’m adventurous enough to try new things. So, when I heard about the healing ceremony of a Temazcal, I was interested in trying it.

A Temazcal is a sweat lodge which originated in Mesoamerica and the rituals are still practiced today in Mexico. It’s good for healing the sick, improving health, or ridding any spiritual issues by being subjected to high temperatures from steam coming from hot volcanic rocks. We were to sit in the dark in an enclosed igloo while chanting, drinking tea, and going through the ritual. Count me in! This sounded like an adventure!

I Tried a Temazcal Sweat Lodge in Mexico

When we arrived, a friendly woman greeted us. The place had good energy and didn’t look like anything out of the ordinary. She served us tea made from lemon grass, mint, and piloncillo (Mexican sugar). The tea was to prepare our bodies for the hot temperatures we could endure, up to 120 degrees. It gets so hot that it is believed in Ancient times they would drink Peyote and the heat would swell the brain causing hallucinations. We were served tea, simple ordinary tea and she made sure to tell us that we were not drinking a hallucinogen.

We were guided to the back of the house where a bright yellow, beautiful Temazcal stood before us. That’s where met our Shaman. We asked about the process and he said it would be a surprise. “It going to get hot in there,” he warned. He insisted that we get into our birthday suits. “Just a recommendation,” he stated about ten different times during our conversation. It kind of creeped me out. We held on to our garments with a tight grip and refused to disrobe.

We were shocked by how hot it was. It felt like a sauna. The Shaman handed us a fresh lemon to rub all over our body. This step was so we could purify ourselves for the next ritual which was to rub herbs on ourselves and release any negative tensions.

He threw water on the volcanic rock and the steams burst in the air. Whoosh, steam. It was so hot that we could not breathe out of our nose. I sat on the stool instead of laying down which is recommended if you can’t tolerate the heat. I know what you’re thinking…a chef that can’t stand the heat right? We had a bit of light coming in from the crack of the door and I could see that he was showering himself with cold water to keep cool. I immediately asked for a bucket to be poured on me to cool down. My head began to hurt, and I wondered if my brain was swelling. What was in that tea? Whoosh more steam.

He continued the ceremony and handed us a jar of wet coffee grounds and we rubbed it on ourselves to stimulate our circulation. Then more steam. Sadistically the hotter it got he reminded us that it was only going to get worse. He handed us a jar of local honey. What? We rubbed the honey on our bodies which melted off quickly because it was so hot in there. 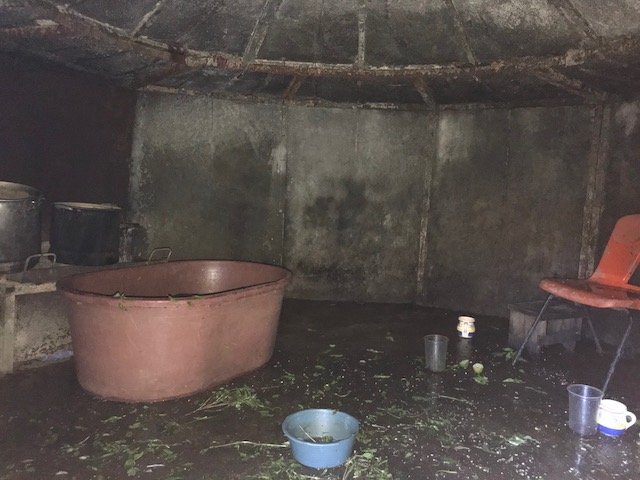 Inside a Temazcal Sweat Lodge

After a long and horrendous forty-five-minute ordeal, the ceremony was almost over. We stood there, hot, sweaty, sticky with twigs in our hair wondering what was next. He sat and stared at us and began to chant or was he laughing? “Chant,” he said, “Say whatever sound comes to mind.” Nothing came to mind other than, “Can I have another bucket of cold water.”

He recommended that we stay in the Temazcal for five minutes without him to chant and pat our bodies with bouquets of Ruda which is common in spiritual practices and is believed to have mystic energy. He handed us an egg. “Rub the egg on your forehead, chest and stomach to capture the bad energy. Don’t break it open.”

Left alone, we stood there, and I asked my friend, “Want to make the best of it?” I suggested that we shout wishes out into the darkness in case the Gods were listening. We asked for good health, love, and everything our heart desired. Every time she shouted her intention, I smacked her with the bouquet and chanted “The power of Christ compels you,” like the scene in the Exorcist to rid her evil spirits. We began to laugh and a knock at the door told us our ceremony was over.

We went home exhausted, confused, and dehydrated. The one thing for certain is that we came out of it thinner, exfoliated and this experience brought us closer together.

Do I cook at home?

A Day in the Park…CDMX

In the presence of Gods (La Singularidad de Cosme)

I’m Eating an Onion! My visit to Emilia Restaurant