There I said it. They say it’s the first step to admitting you have a problem. I am a chef after all and I have a responsibility to try everything that is put in front of me. I’ve made two trips to Mexico determined to find these delicacies, and was compelled to bring them back to share this experience with you.

In the past, insects were the main food component and diet of Mexico before Spanish conquest. Insect consumption goes back to prehistoric times when Mexico didn’t have cows, chicken, or pork as a form of protein. Bugs were a great alternative. Mexico like any country lives and feeds off the land. In the United States, we eat possum in the south, alligator in Florida and in France they eat Escargot which are snails. We learn to survive with what we have. We tried the three most popular types when on our trips to Oaxaca and Mexico City.

Gusanos – butterfly worms found in the Maguey plant which is used to make Tequila and Mezcal. When we arrived I saw this worm was at the bottom of a Tequila bottle, having me re-embrace my party days in Tijuana where we earned our t-shirts that said, “I ate the worm.”

After a few shots of smoky Mezcal in Oaxaca the vendors were kind enough to roast and serve them with peanuts. Somehow, once we were tipsy, I realized I no longer had an issue eating them. Almost like drinking to the point where you get goggle eyes. I was expecting them to be gummy but they were toasty and salty. They reminded me a crispy French fries. 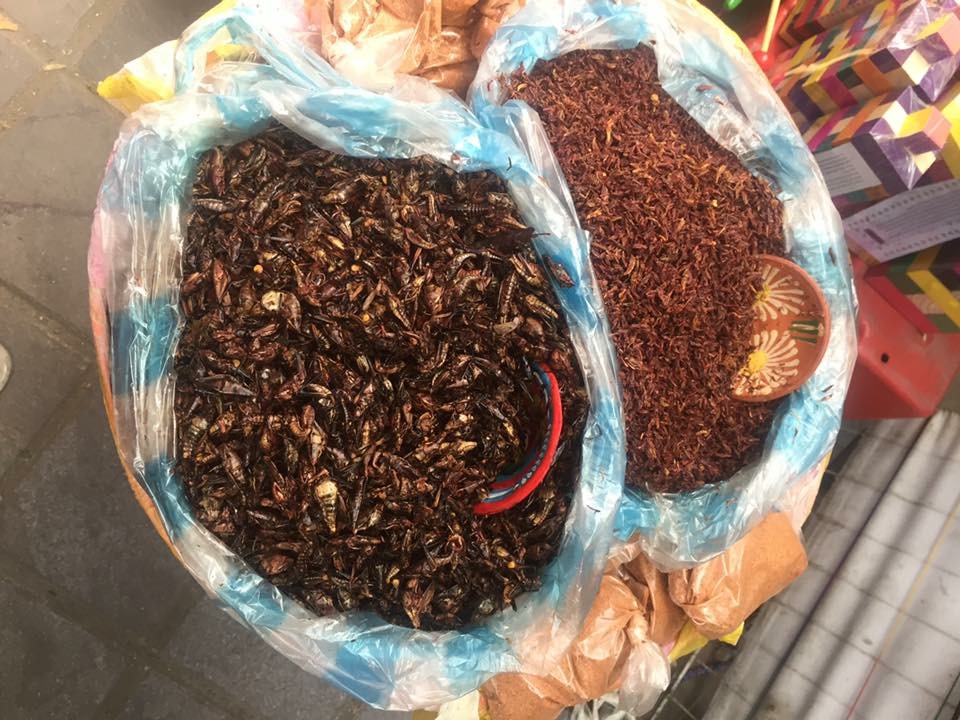 Chapulines – Grasshoppers are another popular insect delicacy found everywhere in Mexico. The streets were saturated with vendors that sold them. Grasshoppers are high in protein, nearly as much as salmon and with absolutely no fat. They are filled with nutrition and are the staple of Oaxaca. The streets were filled with huge sacs of roasted grasshoppers coming in many different flavors. I chose the salted garlic flavor. I won’t lie I had a difficult time working up the courage to eat it, because they look just like the grasshoppers we find dead in our backyard.

However, I didn’t want to offend the 85-year old woman whose sole purpose is to sell these at the Mercado, so I quickly placed it in my mouth. I can honestly say the flavor was like a sun-dried tomato. On our way back to our hotel we got caught in a storm, and found refuge in an ice cream parlor. The owner let us try a Tamarindo Chapuline sorbet and it was surprisingly amazing.

When we served them at the restaurant for our Oaxaca Tequila dinner they were such a big hit that no one took pictures of the rest of the food I prepared. The buzz was all about the grasshoppers.

Hormigas Chicatanas – Reddish brown flying ants with huge wings that only come out during the rainy summer season of Oaxaca. We stop to put gas in the van and I was caught by surprise. They were so many flying ants that I felt I was trapped in a scene from Exodus. “Those are Chicatanas” the tour guide explained. It almost seemed like they came to bid me farewell. We were not able to eat them that day, so I made sure we scheduled a trip to Mexico City.

We finally had the chance to try Chicatanas at the restaurant Pujol in Mexico City. Chef Enrique Olvera roasted the ants making a sauce using a molcajete (stone mortal and pestal) and mixed the paste with mayonnaise. He served it with baby roasted corn in a hollowed squash vessel filled with smoke. The sauce was delicious, and smoky with a charred flavor. The baby corn added a nice sweet finish to the bite.
So, there you have it! I have tried three insects from Mexico. I eat bugs! When in Mexico, get a little adventurous and try them. Send me a picture or comment to Chef Rosie O’Connor on Facebook or IG @chefrosieofficial I will love hear from you.

I’m Eating an Onion! My visit to Emilia Restaurant

A Day in the Park…CDMX

Interview with Chef Javier Plascencia at the James Beard House

Goodbye to a Decade of Lessons, Tears, Agony and Joy