Pictured above is my son when he was just a little guy.

October is Domestic Violence Awareness month and I want to share a story with you. Not for pity, but to share something that changed my life entirely.

As you may know, I was very young when I had my son at the age of sixteen. I wanted so much to have a family and give my son the privilege of having a father.

I was young, insecure and had such low self-esteem. At that time, I didn’t realize that, as a single mom raising my son, we were already creating a beautiful family.

Sometimes I think if I could go back, like the movies, and have a talk with myself, what advice would I give myself.

Not long after my son’s birth, I fell in love with an intelligent, handsome, charismatic man who was nine years older than me. While we were dating, he convinced me to move away to San Francisco with him. I was committed to him and crazy in love, so of course, I said yes.

In the beginning it was beautiful. Sam was so supportive, encouraging and made me feel special, like I could do anything. My son loved him and asked him if he could be his dad. He was just three at the time. My heart melted because I could see how happy he was.

Once we had settled into our relationship, the compliments began to slowly diminish. His wonderful encouraging words became criticisms. His loving eyes turned into looks of disgust, frustration and anger. He would often taunt me, threaten me, beat me, and take the money that I earned as a waitress.

Somehow, I had become the provider and he insisted that I take on more shifts at work. I had no friends because he liked it that way. I grew more and more isolated as the relationship went on.

Our relationship always seemed to have extreme highs and lows. Just when I thought it couldn’t get any worse, out of the blue, he would do things that would completely change my mind.

One time, he came home with bikes for all three of us, so we could ride together as a family. He would sometimes do things for my son that made him so happy. That was how he hooked me. Sam was very manipulative and knew exactly how to play my emotions.

One morning, I remember not wanting to make him breakfast. I was tired because I had worked double shifts at work for a couple of weeks straight. He became infuriated and started throwing plates at me. The plates shattered all around me.

I remember crying and screaming at him to stop. Instead, he grabbed me by the hair and forced me down to the floor. “Clean this up!” He yelled. My knees began to burn as the broken glass cut into my skin.

He was late for work now because of me. He grabbed his things and stormed out. My son came out of the room and had witnessed the whole thing. He was crying and scared. I will never forget that look in his eyes. I had moved to San Francisco for a better life. Not for this. How did I end up here? How could I let this happen? How was this happening to me?

I thought to myself, if I can run a household of three, I could surely run a household of two. At the time, I was working in a little restaurant in Pacific Heights. I was making really good tips, sometimes up to $400 a day. Thanks to this job, I was able to afford a two bedroom flat.

What did I need him for? I came up with a plan. I decided that I was going to leave, but how? We had a joint bank account. The credit cards were under his name. He would not allow me to touch a dime in that account or use any of the cards.

I knew there was a Wells Fargo right across the street from where I work. I decided to open an account and asked for a safety box. I used the restaurant address so that my mail went there and I stashed the key by the register.

I started putting money away. Little by little at first, and then by half on every shift. One night he asked why wasn’t I making the same money. I remember telling him that the restaurant was doing really bad and they were thinking of closing. “I should look for another job. I’m getting worried.” I was surprised that he believed me and I continue to save my cash.

One night the phone rang, and when I picked up, I was surprised to discover Sam’s ex fiancé on the other end. Apparently they had been seeing each other and her new husband had found out they had been “speaking” to each other.

When I told Sam, he went crazy and smashed the phone to pieces. He beat me and started to choke me. I was fighting him off and struggling. Then he stopped suddenly when we heard banging on the door. It was the police.

I was crying and my face swollen. I could taste my own blood on my lips. I ran to the room where my son was hiding in fear and prayed that they would take him away. They arrested him that night.

After he left, I was filled with anxiety and hurried to pack up all of our things and get out. A friend from work took us in for a few days until I was able to get us situated and in another house.

That day, we started our life over…just the two of us. Me and my boy.

This is me and my son now. 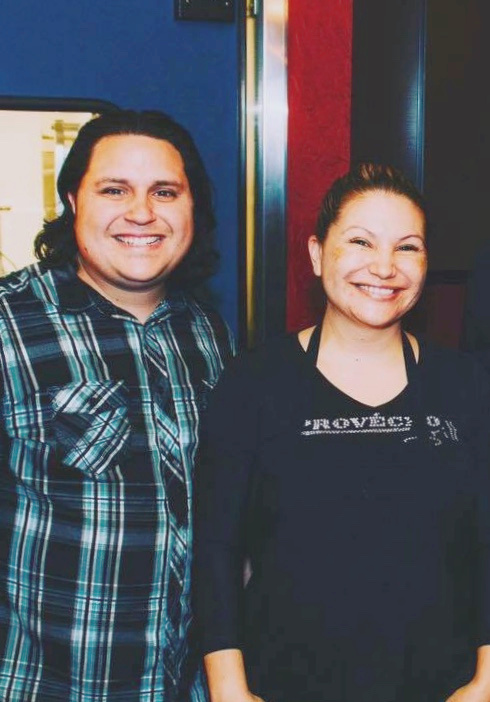 When I hear about women in abusive situations, I can relate on a personal level, because I’ve been there. My heart breaks for these women. I know it’s not easy to just pack up and leave. I know the pain you are going through and the fear associated with it. I was terrified and had to move again after that day, even further away. Eventually he left us alone.

Until this day, my son and I don’t speak about Sam. We don’t want to relive those memories. Sometimes, I forget that we even had anything to do with each other. I’m honestly glad that he rarely comes across my mind anymore.

But that doesn’t mean that this experience hasn’t changed me forever. I haven’t loved the same since and the experience left me tainted in some ways. I swore never to love anyone that way again.

I don’t have all the words to explain why I chose to say, but I’m proud of myself for choosing to leave. I’m proud of the live I have built for myself and my boy.

And one thing I know for sure, is that I didn’t deserve the abuse. I didn’t ask for it. I was not the problem.

I just want you know, that I’ve been where you are and I understand what you’re going through. You’re not alone. I hope that my story gives you the strength to get out. What you’re dealing with is not love.

If You Can’t Take The Heat…

Is Mexico Safe? Where to go in Mexico

Goodbye to a Decade of Lessons, Tears, Agony and Joy

The Day I Became a Chef